A few more details added to the DMBS plus the chassis has now been weathered. The front brake rod should be lower but I had problems drilling out the fragile plastic of the Bachmann side frames.  The unit runs very smoothly now. 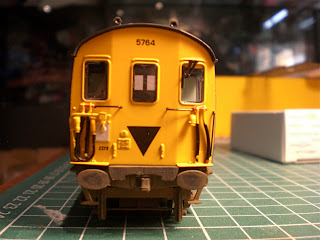 Posted by Rustyrail at 7:44 AM No comments:

Can anyone tell me how to get my followers thumbnail photos back? I've already got the followers gadget installed but nothing is showing...
Posted by Rustyrail at 3:01 PM 5 comments:

The 2 EPB stands on its rough looking test track - the eventual third rail set up won't look like this! I temporarily put the body back on the chassis for some photos. As you can see there's lots to do on the model; extra detailing, painting, weathering, refining, etc. However, it all looks promising and runs well. The second photo shows the unit with a slight lean; this is not because of the third rail pick ups (they are too soft to effect any movement on the bogie) it's the extra bogie internal wiring that needs bedding in.
On reflection the pick up cross beam could have been a bit shorter as the pick ups protrude over the outside of the conductor rail a little too much, even though they are in full contact with the rail. I might modify the arrangement before completing the model. 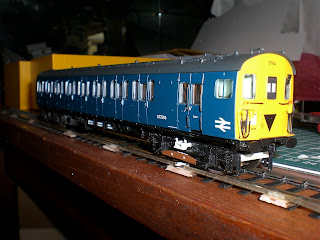 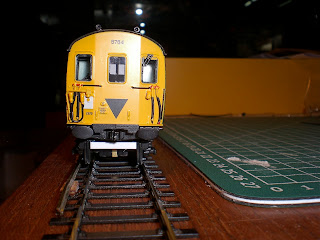 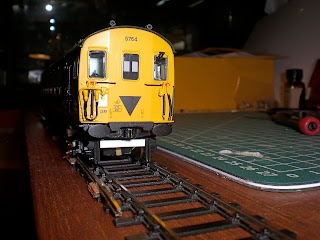 Posted by Rustyrail at 9:41 AM No comments:

The Bachmann 2 EPB has now been partially converted to P4; the TMBS is now re-wheeled with a Black Beetle and plain 18.83mm coach wheels. Initial running trials of the motor bogie with the Bachmann side frames added was not very encouraging - very rough and hesitant. I couldn't work out what was wrong at first, but after removing the outside frame assembly I discovered the cause - the brake shoes were rubbing the wheel treads (at least they were in line!). So some careful work with a sharp craft knife and very fine wet and dry soon sorted that out and the unit ran smoothly. I then temporarily assembled the whole chassis and this also ran very sweetly and true up and down my P4 test track.
Today I've been assembling the working third rail pick ups, having made up the parts yesterday.  The description below is rather rudimentary just giving an idea of how this tricky "experiment" was achieved.
I opted for a very thin strip of plastic sheet that has a nice light spring to it for the main cross beam and very thin nickel silver strip for the pick up shoes. The plastic cross beam is super glued to a small square of plywood strip; then two very fine wires (removed from stripped layout wire) were also super glued to the ply strip leaving four free ends. The nickel silver strip pick ups were fashioned into shape by observing a No Nonsense kits 2 EPB whitemetal pick up; it is as close to scale as possible (1.3mm wide is the correct scale for 4mm). These were then soldered to two of the fine wires and the pick ups then superglued onto the ends of the plastic cross beam. The other two fine wire ends are connected to two flying leads coming off the motor. The resulting assembly is very fragile and fiddly and has to be handled extremely carefully! It was super glued to the base of the Black Beetle making sure the pick ups were in line with the shoe beams. It looks very good and is not far off the prototype 2 EPB pick up. The spring of the pick ups is light but quite positive.
I then turned my attention to setting up a third rail test track using some spare C and L flexi track and a piece of Scalefour Society conductor rail (this has the correct scale prototypical profile). As this was just to assess whether my third rail pick up experiment worked or not I glued the conductor rail, at the approximate contact height, onto some small bits of ply strip which had been super glued to the sleepers of the flexi track. I then wired it all up (two positive leads and one negative lead). The moment of truth had arrived...  I gave the motor bogie a spin...   and off it went, smoothly and quietly! The pick ups worked a treat and just to test that they were picking up current I removed a positive lead from the track; the motor bogie still worked well! I was very happy indeed. I also put a test ramp into the conductor rail to see how the pick ups entered and left the third rail; the springing action was realistic and positive, and when the third rail was providing the only positive current, the bogie would stop as it left the ramp. Excellent stuff and most satisfying. I will now go ahead and build the layout with a working third rail system as planned using Scalefour Society insulator pots and conductor rail. The photos below show the system in "action" just after the first few test runs. The pick ups themselves will be refined and tidied up and then weathered.
The remaining work on the Bachmann 2 EPB will now continue to finish off the P4 conversion and super detail the unit, with suitable weathering applied. 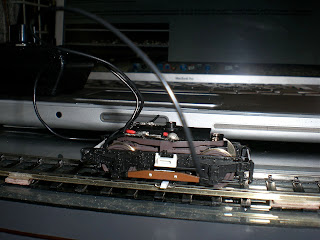 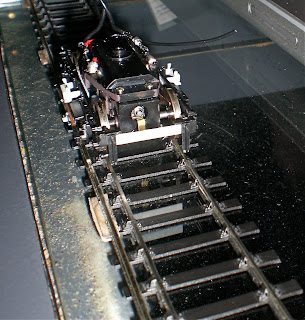 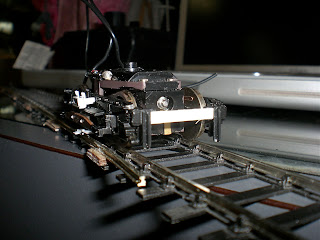 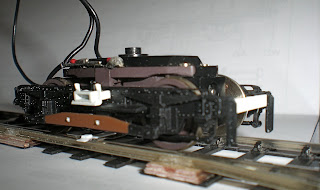 Posted by Rustyrail at 7:55 AM No comments:

The new Bachmann BR blue 2 EPB gets the P4 treatment!

The newly released Bachmann 2 EPB (class 416) is a lovely looking model and very accurate, by all accounts (save a numbering issue?). I'd always earmarked one of these for my St. Mary Hoo layout and now that I have one, it is being converted to P4 by yours truly. This is surprisingly difficult to achieve (at the moment) without an Ultrascale conversion wheel set available. The main problem is the lack of room inside the plastic bogie frames for 18.83mm wheel sets, plus if you want to preserve the internal lighting, the existing bogie bearing/pick up system presents a challenge. I've now worked out my own conversion system for this, with working third rail pick up shoes for live third rail. So I will describe all of this soon. Below shows the early stages of destruction... always the worst bit of any conversion job.. 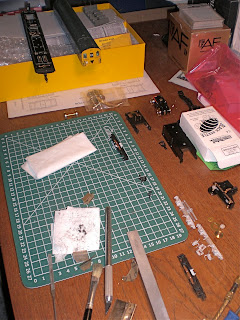 Posted by Rustyrail at 11:34 AM No comments:

Here's a link to a wonderfully atmospheric photo from the long gone Wisbech to Upwell tramway in Norfolk; this lovely picture will provide plenty of inspiration for St. Mary Hoo:

After many months of inactivity on my blog due to unforeseen circumstances (many apologies to all my followers!) I'm back! And to kick off the new season here are some photos of my first P4 loco conversion. The familiar and very reliable Bachmann 08 diesel shunter was the candidate for my experimentation. The loco was an already heavily modified OO gauge model; I had replaced the extant plastic leaf springs with homemade ones made from strips of copper, plus added individual leaf spring support rods made from fine brass wire. The difference in appearance is amazing but the process involved to achieve this is very difficult and time consuming (see Tim Shackleton's article in the MRJ issue 124, 2001) and not recommended for the those of a nervous disposition! Unlike Tim I used a sharp craft knife to remove the plastic outside frame detail. Lots of other details were added soon after.
Anyway, the P4 conversion started with a brand new set of Ultrascale wheels. These are fairly easy to install but the Bachmann pick ups are quite difficult to modify to accommodate the wider 18.83mm gauge, due to the limited room where they are located in the chassis. I eventually opted to bend them through 90 degrees so that they pick up from the back of the wheel. I also had clearance problems that bog standard Bachmann 08's (and Hornby for that matter) don't have during this conversion. The reason being that my leaf springs are much thicker than the plastic relief versions. So a spot of fine filing was necessary to cure this. I then made a set of balance weights from plastic card (this took all day because they are so ruddy small and fiddly!). Finally I refined the Bachmann coupling rod bosses to a more acceptable size; I may eventually buy some Brassmaster ones.
Well, the virtually finished loco can be seen below in both BR black and blue liveries; the chassis has been painted in the correct colours for both these liveries plus green if necessary. For St. Mary Hoo I think it may end up as a black loco with the body suitably weathered (lightly). The model runs very smoothly and reliably I'm pleased to say... 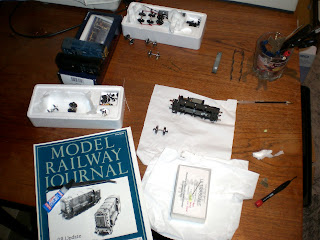 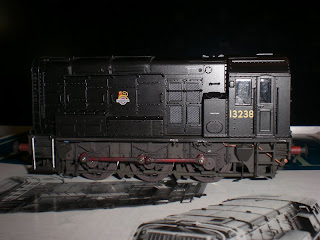 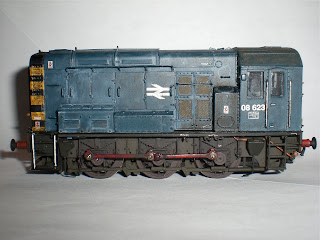